Vttest tests the compatibility (demonstrates the non-compatibility) of so-called “VT100-compatible” terminals. In conformance of the good old hacker traditions, the only documentation of this program is the source code itself. To understand it, you also need a copy of the original VT100 manual from DEC.

Additional tests (past version 1.7) are provided for analysis of vt220 through vt520 terminals, as well as variants of xterm.

I began this version in May 1996 (starting with 1.7b) to support changes that I am making to xterm. The program has grown from about 2400 lines to more than 18,000 lines of code. See the changelog for details.

I changed the version number to 2.0 in the initial release, in 1996, and went up to 2.7 shortly after. Since then, the patch-date is the effective version number.

Most of my visible changes are via two menu entries at the bottom of the main screen: 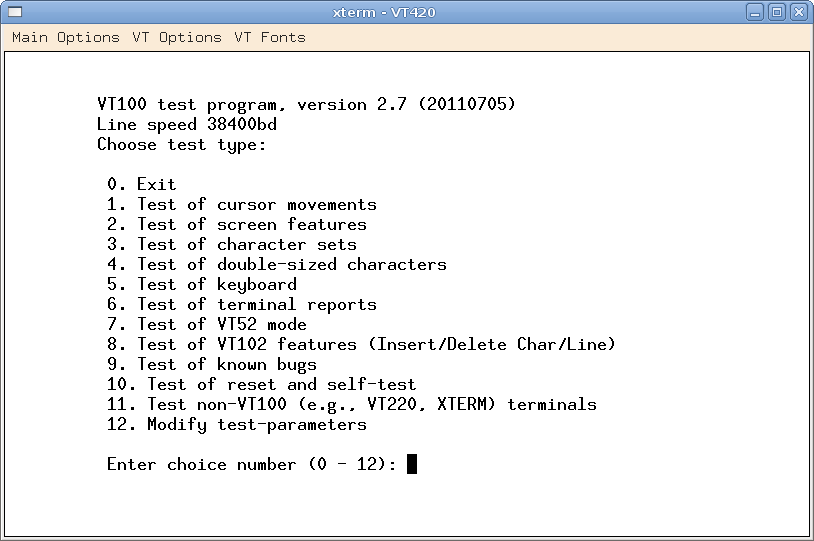 However, I restructured the entire program, adding screens to existing tests, and menu entries (for instance in the terminal reports). In the restructured program, it is much simpler to add menu entries, since they are built from tables rather than case statements.

On the other hand, I kept the overall indentation style of the program. There are no tab characters.

My original motivation for working on vttest was to provide a way to test the color changes I was making for xterm. Drawing colored text is straightforward. Drawing colored backgrounds presents many choices. For instance:

None of those choices are automatically "right" or "wrong". Designers of different terminals (and emulators) have chosen to implement color in different ways.

For xterm, I chose to match the Linux console behavior. That was a starting point. But (see below) I continued past this point, implementing features from VT220 and later, including controls (DECSCA) that can protect against erasure.

The particular erasure choices used in xterm and Linux console are modeled in ncurses as the back color erase (bce) feature. Early on, we (I and Alexander V. Lukyanov) found that the bce feature was nowhere defined precisely, and settled on the current behavior. Other terminals (such as rxvt) do not exactly match this set of choices, so controls which differ are not in the corresponding terminal description.

I added screens to vttest to illustrate the bce behavior, helping to ensure consistency.

For instance, this was once of the earlier screens I wrote to demonstrate and test erases against the bce color model:

Even Linux console has had occasional issues, where it is inconsistent, e.g., a blunder in 2008 as reported on the Linux kernel mailing list here by Alexander V. Lukyanov. The problem was introduced here, and broke the bce feature of Linux console for several months. Vttest might have been useful in that case. 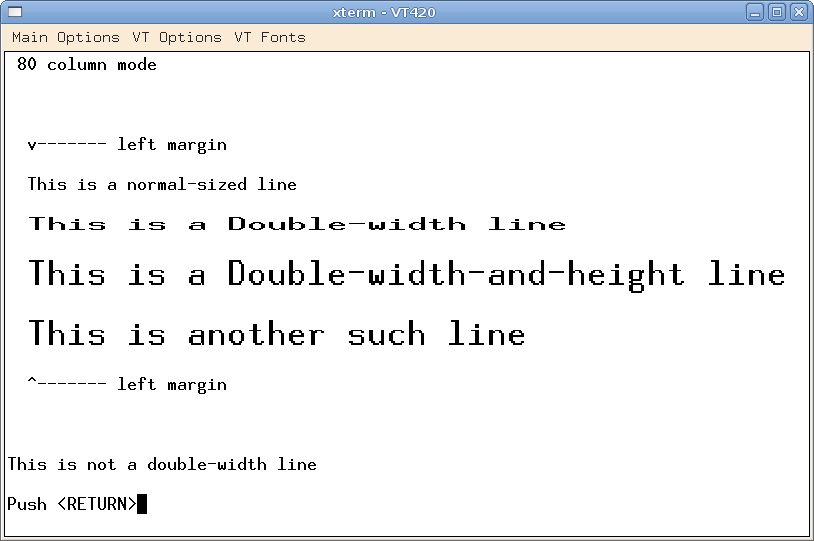 After I had been working on vttest for a while, I realized that xterm had features (other than the obvious case of function keys) that were not found in a VT100. These control sequences switch to a different character set for just one character (a single shift) or until undone (locking shifts). The VT100 line-drawing characters are a special case of the latter.

The set of single- and locking-shifts are features of the more advanced VT220 terminal. Seeing that, and understanding that it would allow xterm to be more useful to people around the world, I decided to fill in the missing pieces to make a workable VT220 emulator. Years later, of course, UTF-8 became a more valued feature. But I use different programs than vttest for testing xterm's UTF-8 support.

Some of the features (in particular the character sets) are visible only when the terminal identifies itself as a VT220 or above. For instance, the top-level menu "Test of character sets" shows only the VT100 character sets for VT100s: 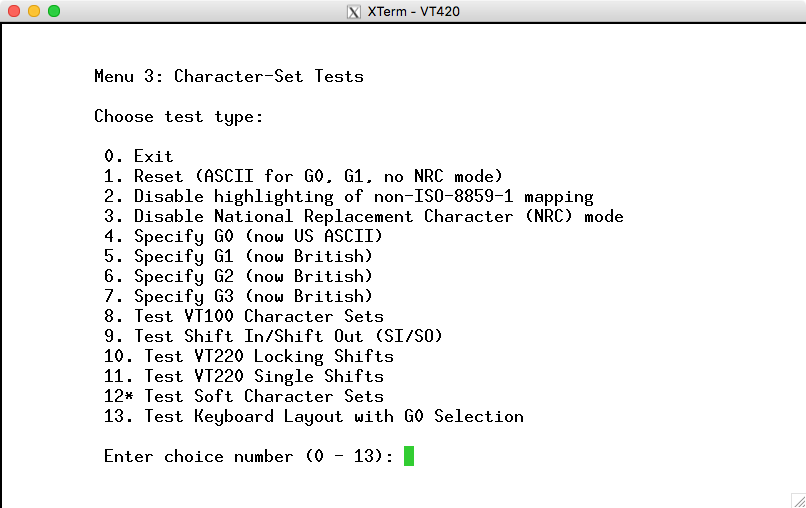 VT220s provide something like ISO-2022 support for several European encodings. Here is an example using the locking shifts, showing French and Italian: 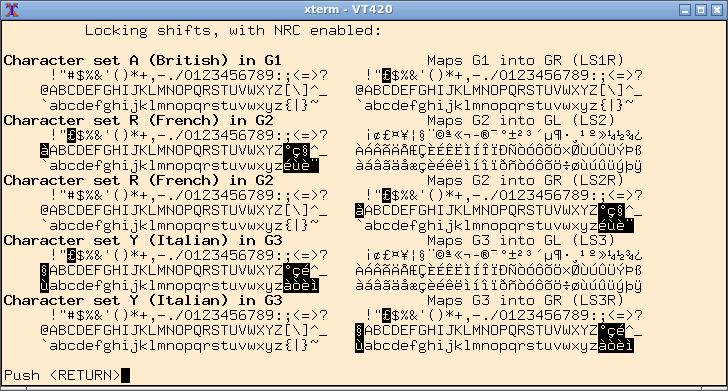 Incidentally, the VT220 and up can be switched into a mode where they identify themselves as lower-level models (analogous to the VT100/VT52 switching). You can do this in vttest using menu 12: 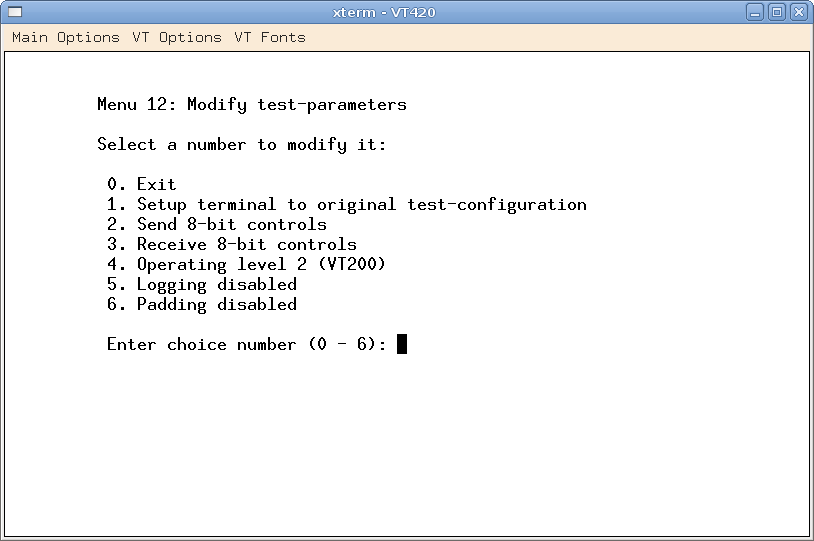 The Linux console used to recognize 8-bit controls. I gave advice to Albert Cahalan (see links), who used vttest to identify and repair most issues. However, later work to change the console driver to support UTF-8 broke that, though comments in the code still claimed that the feature was supported. Early in 2006, I submitted changes which were applied to the console_codes manpage, including the BUGS section. This paragraph is pertinent:

DEC's terminals were all upward-compatible:

Each model also provides more new features than the total in its predecessor. Not all features are useful for a terminal emulation (such as the dual-session feature of VT420). I have implemented tests for the features which either are in xterm, or are simple extensions (such as the variations on status responses).

Vttest organizes these according to the terminal type. Features found in ISO 6429 but not in a particular DEC terminal are via separate menu choices from XTERM and the VTxxx flavors: 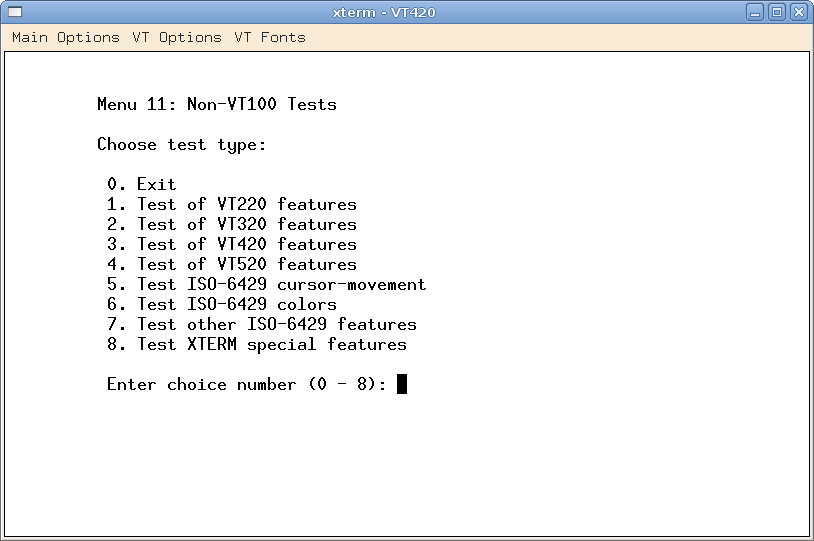 Early on, I found that ECH (erase character) is a VT220 feature rather than VT102. It is perhaps the most commonly implemented extension of “VT100 emulators”. 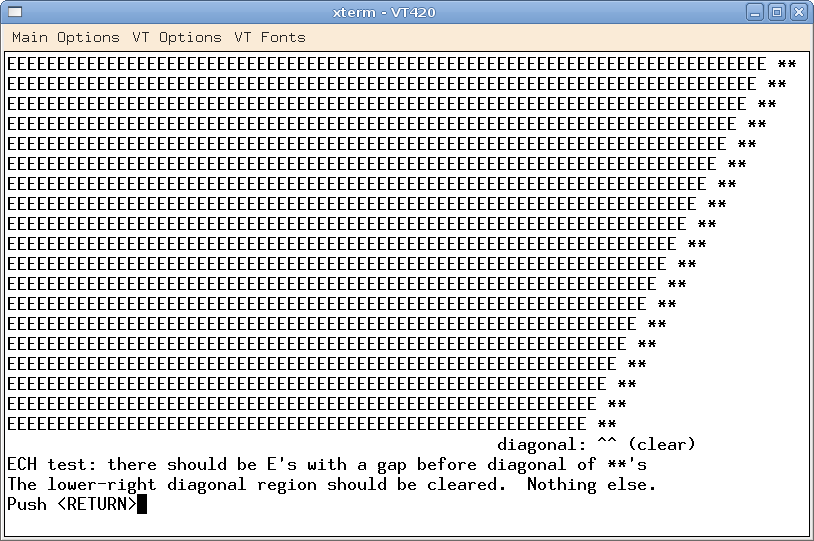 As it is implemented in rxvt (unlike xterm and Linux console) it does not behave the same with regard to color as ED (erase display). After some discussion, it was determined that

For example, I recall using more than one terminal emulator with “VT340” and color, for instance TNVTPlus (developed by FTP Software, Inc.). That, by the way, differed from xterm regarding the way color was set when scrolling in "blank lines". There are as noted several choices, and none are blessed by an official standard. Vttest demonstrates the set of choices used in xterm and Linux console.

Xterm implements several features from models past VT220. One of the more interesting is the ability to work with rectangles on the screen (from VT420). That is (both in vttest and xterm) only provided when the terminal identifies itself as (at least) a VT420:

Given the proper configuration, vttest shows rectangles. As an extension, xterm supports color:

ISO 6429 has several features (including scrolling not implemented by DEC terminals). The most useful set of tests is the color menu: 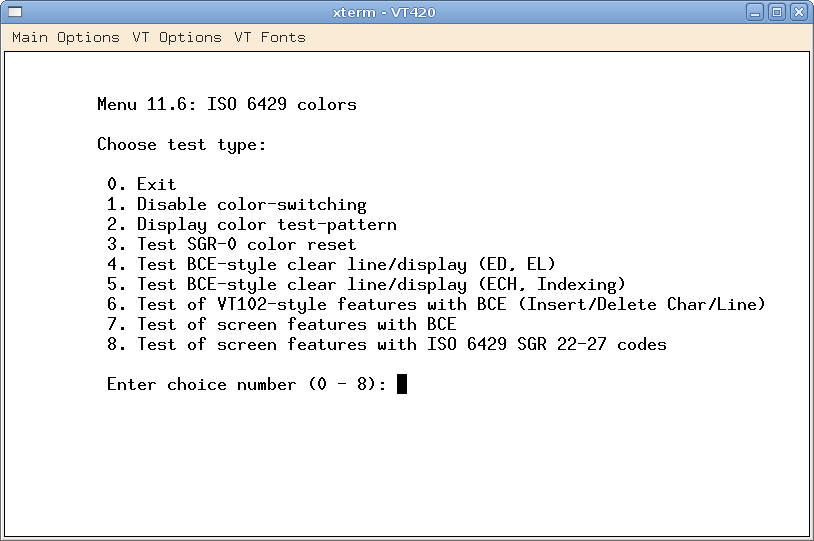 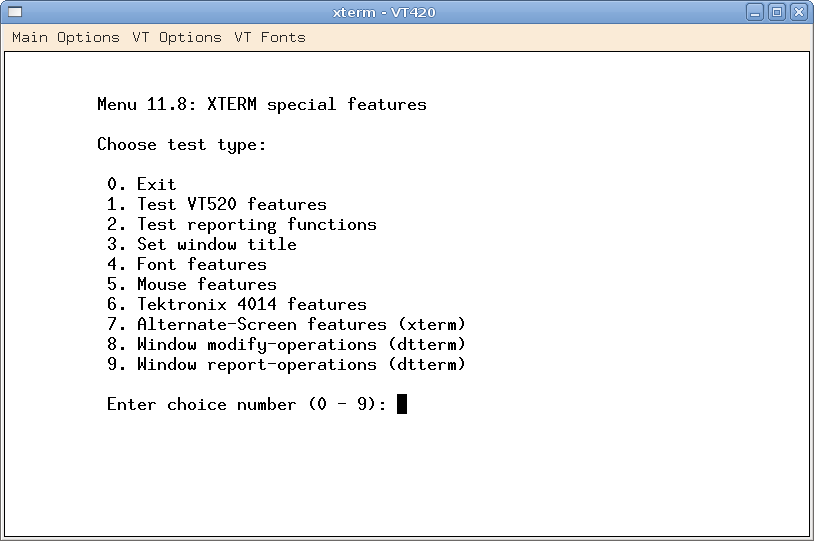 The window modify- and report-operations attributed to dtterm (because that was the only extant usage in 1996) had appeared in the X10 "6.6b" version xterm. Like its successors through X11R6, there is no changelog, so it was not possible to determine when/where the features originated. But they predate dtterm. Some additional information is given in XTerm Control Sequences.

The original distribution of vttest used licensing terms which were problematic ("noncommercial"), e.g., for the Debian packagers:

I contacted Per Lindberg in 2007, and suggested that it be changed to a BSD license. He agreed. My changes have always been compatible with that.

There are numerous references on the net to vttest. Here are a few of the more interesting ones:

The System Under Test page only skims the surface of testing a terminal.

These are tools which others have developed: