Like the modified function- and cursor-keys introduced in patch #94 (1999) and refined in patch #167 (2002), xterm can send other keys as special escape sequences. Again, that was due to another developer's suggestion.

It was simple enough, at first:

Emacs users like key bindings, so the request was not really surprising. I had not thought of extending xterm in this manner:

I was willing to do this:

I chose this format because it was consistent with the earlier work, and (noticing that 27 was unused) chose that as the primary code. After all, decimal 27 is the “same” as the ASCII escape character.

As promised, I added the feature in patch #214. Nicolaescu added support in Emacs in xterm.el in stages beginning in May 2006.

Seeing that there would be different user preferences for this area, I added resource-settings (and when appropriate) new control sequences for enabling the corresponding function-key feature. In summary:

In March 2008, I received mail from Paul Evans, regarding the modifyOtherKeys feature. He asked about the reason for choosing the 27 encoding. Also, he asked for more information:

In response to my explanation of the 27, Evans responded

Evans was unfamiliar with the nuances of the X11 library (and how its keycodes and keysyms are related), and did not pick up on the mention of *LookupString() or xev.

He also ignored the fact that it was used in Emacs, stating

Actually, the “fixterms” documentation is far shorter than this page, and does not go into much detail. It mentions a few specific control characters (tab, return, escape), but states that other control characters use the CSI-u encoding. The page also conflates the modified cursor- and function-keys with the “other” keys (in the section “Really special keypresses”).

If Evans had constructed a table to illustrate the difference between xterm and his objective (as well as participating in development), he might have gotten somewhere.

Between those last two messages, Evans had done some development. While he had begun libvterm late in 2007, it was not until late 2011 that he began making changes to support the CSI-u format:

There is no documentation for pangoterm aside from its source-code. Likewise, documentation for libvterm is scanty, consisting of a list of output control sequences which it supports, noting those which were from VT100, VT220 or VT320 (some inaccuracies noted). The list does not mention which were from xterm or ECMA-48 (about 10% is from xterm versus the other categories). But it does not mention input sequences. For that, one must read the source-code or test it, e.g., with tack. As one might guess from the commit-comments, there are some quirks.

All of the relevant processing is done in xterm's input.c, and the resources which control this are documented in the manual page. But the interaction between these resources and which special cases apply to a given key can be hard for users to follow, without testing.

Developers can have a hard time with this as well. One could use xev, to see what events the X server may send xterm. Most of xev's output is not useful. But xterm has a debugging trace which shows the useful information. For this example:

the debugging trace contains this information:

Some of the lines have nothing in the quotes, e.g., the lines with keysyms 0xFFE3, and 0xFFE2. Those events are for modifiers. The X library takes those into account when it delivers the function key F1 (0xFFBE) and the 'H' (shifted 'h').

The case-conversion (“h” to “H”) is handled by the keyboard configuration. This aspect of the X library is documented in The X Keyboard Extension: Library Specification. The fact that uppercase and lowercase letters happen to be on the same key is incidental to the overall scheme of groups and modifiers.

In October 2019, Bram Moolenaar asked for more information about how xterm prefixes keys. That led into a discussion of modifyOtherKeys, noting that the manual page description is rather short. I suggested that the best way to document this would be to construct a table, to make it simpler to see the pattern (and special cases). The resulting script (modify-keys.pl) does this:

I verified the script (for my keyboard, at least) using a curses application xterm_keys which I wrote in 2006 to help with my other-key and function-key development. That sets xterm into the various keyboard modes, and prints the result from typed keys in readable form. 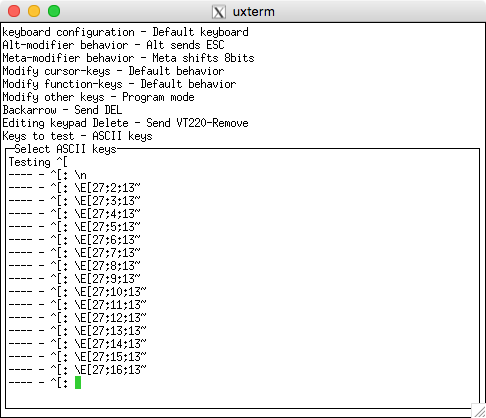 This example shows xterm_keys, using xdotool to send all 16 combinations of shift, alt, control, and meta for a given keycode to an xterm whose Allow SendEvents has been enabled.

That is an animated Gif, showing the various menus. The data window briefly shows the difference between sending 0x000d and 0xff0d (XK_return). The latter can have a shift modifier associated with the event.

but others do not, e.g., Debian/testing:

The modify-keys.pl script does not take that into account; it is always possible to send keypress events directly to xterm without limiting those to the keys listed in the XKB configuration. On the other hand, although xdotool can send keypress events to pangoterm (a GDK application), GDK does not process those correctly. Typing directly into pangoterm, I find also that it does not recognize either the alt or meta key. Omitting those from the test does not help with the xdotool script; testing has to be done manually. Here is a screenshot showing the part of the test which it can do: 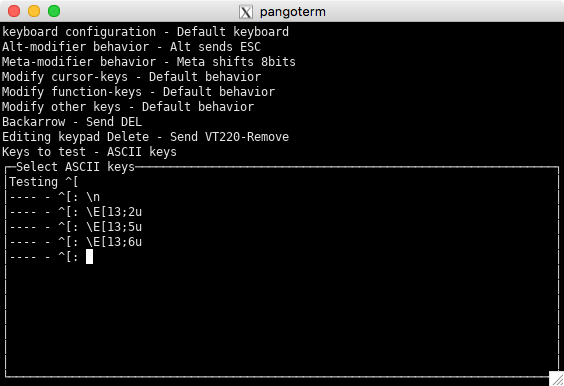 Here are some examples of the output from modify-keys.pl. Because my machine (and Bram's) used keyboard layout “us” and model is “pc105” that has been best-tested, e.g., using the xterm_keys program.

Because Evans heavily promotes his alternative, this elicits some response. To date (late 2019) there are a few implementations, and some related discussion of applications which could be modified to work with the feature:

In the neovim issue, there is a comment by Evans:

Others reading Evans' comments come away with the understanding that Evans is saying that xterm imitates pangoterm, and does a poor job at that. For instance, in Add Escapes for Ctrl-Tab Shift-Ctrl-Tab (vte #94), Martin Hostettler wrote

and later (after some discussion) altered his comment to say

With more insight, Hostettler might have pointed out that xterm's CSI-u implementation predates fixterm by a few years.